Added to your basket

Sorry, there seems to have been an error. Please try again.
Product Name

Subtotal: ( items in your basket) 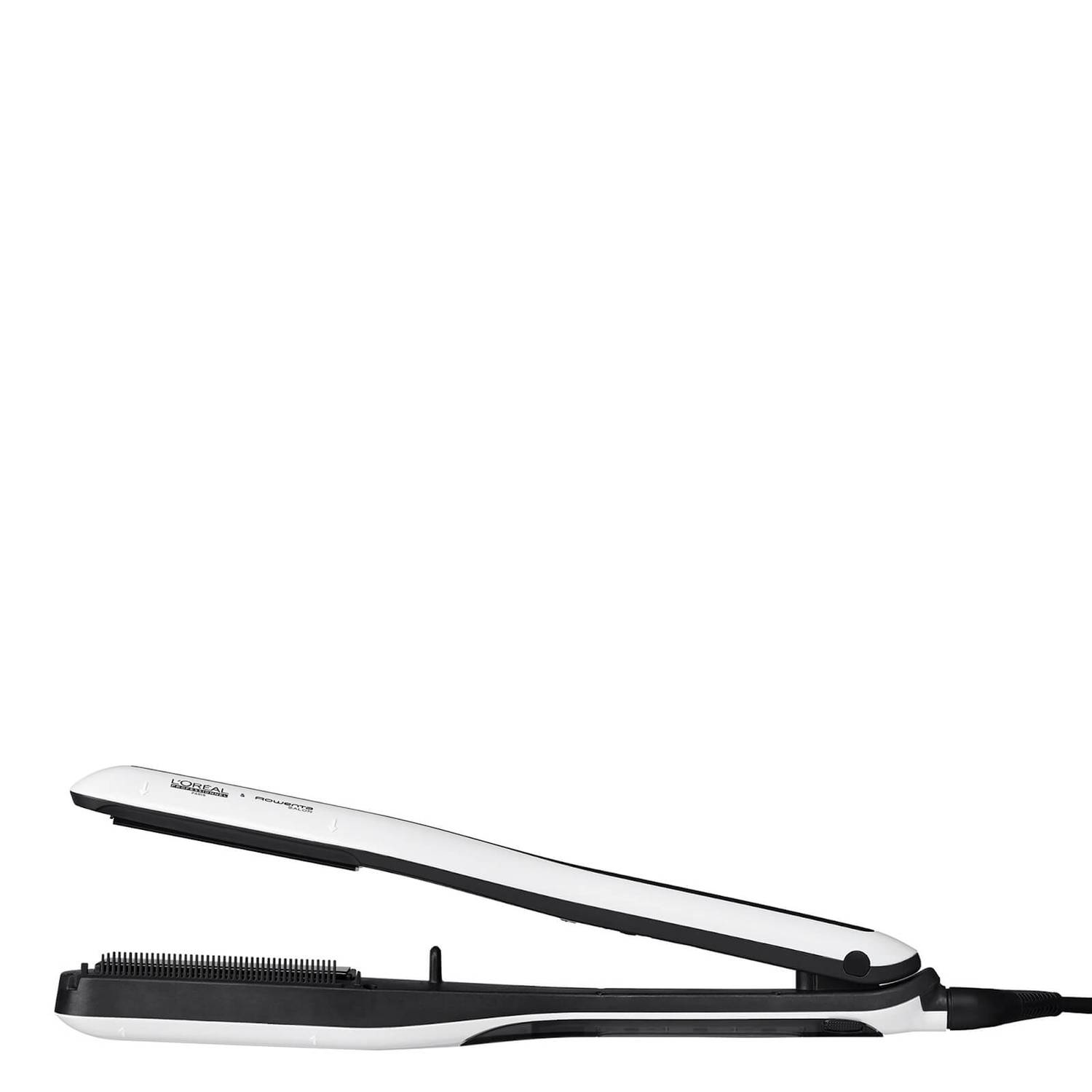 Steampod 3.0 by L’Oréal Professionnel Paris allows you to style your hair safely and professionally from the comfort of your own home whilst helping you create versatile salon-worthy styles.

For best results, use the stylist recommended Steampod care routine.

Fill the built-in water tank with filtered water and adjust heat to the preferred setting. Use the hair straightener in the direction of the arrows. Use on dry hair. For the best results, use the stylist recommended Steampod care routine.

Item limited to max quantity of 6

No card? No problem. Choose Vyne at checkout.

Express Delivery Available - If ordered before 11pm, delivered by courier next working day.

Applies to most delivery addresses within mainland UK.

If you're not completely satisfied with your purchase please see our returns policy.

Steampod 3.0 by L’Oréal Professionnel Paris allows you to style your hair safely and professionally from the comfort of your own home whilst helping you create versatile salon-worthy styles.

For best results, use the stylist recommended Steampod care routine.

Fill the built-in water tank with filtered water and adjust heat to the preferred setting. Use the hair straightener in the direction of the arrows. Use on dry hair. For the best results, use the stylist recommended Steampod care routine.

Where reviews refer to foods or cosmetic products, results may vary from person to person. Customer reviews are independent and do not represent the views of The Hut Group.

I was really excited to try this as I have thick curly hair that needs a goof straighten. First thing I noticed was the weight. It was really easy to set up and getting water in wasn’t a problem but it is definitely heavier and a bit more cumbersome than a regular straightener. My hair definitely feels softer after using it than with a normal straightener but it was hard to get to the root.

Initially when I saw the size of the SteamPod I thought it would be difficult to use. I was also a bit wary with the heat settings as I have baby fine hair which I have to be careful with when using heated appliances on. The low setting was ideal for me. The comb however I found tangled my hair so I have now removed this and the second time of using the SteamPod was a lot easier. The steam is a good feature but not when trying to straighten a fringe as it burns. I have a natural kink in the back of my hair which the SteamPod took out without a lot of effort. A bit more practice will be needed to use it give my hair waves. All in all a good product.

I have used this product five times . It is a very attractive looking hair straightener. It is easy to fill the water tank and heats up quickly to produce . You use it on your hair once it has dried . The first time I used it I made the mistake of letting my hair dry naturally . This meant that when I used them my hair was curly near the roots and was difficult to straighten . Second time I blow dried hair straight before finishing off with the steam , this was much more effective . Straighteners were very efficient at straightening my hair but I found them quite heavy to use , I also thought they would be great on long hair and would be speedier to achieve straight hair . My hair did have a shine after using them unlike other straighteners I have used . I would recommend these with anyone with long hair as they do not dry it out . I felt they were a bit heavy for me to use .

The Steampod is a game changer for me

Wow, the Steampod is such a great hair styling product, I am pretty blown away by it. It is essentially the same as my usual hair straightener except that it works with steam. But the superb thing about it is that it straightens my hair with less damage than an ordinary straightener, I have less hair breakage and my hair looks sleeker and less frizzy at the ends after I have styled it. I also I have to use this less often as my hair stays straight even after sleeping on it. With an ordinary hair straightener I have to re-style my hair every day as it just turns in to a mess overnight. When I use the Steampod I just need to comb it in the morning or neaten up the ends at most and it looks fab again. That alone is less damaging for my hair because it is subjected to much less heat damage. I have shoulder length hair that has been bleached (it was dark red) and dyed blonde so I have to be careful and try not to damage it any further consequently I am delighted with the Steampod. It is so easy to use as well. There is a small water reservoir that you fill with filtered water using a little bottle and that is the only real difference between a Steampod and a normal hair straightener. The water lasts for a few uses so you don't need to re-fill it very often. The plates are nice and wide and there is a comb on one side that helps to straighten your hair and guide it over the hot plates. You have three heat settings to choose from, (180, 200 and 210), and as the control buttons are all situated inside by the plates you don't touch them by mistake while you are using the Steampod to style your hair. You can also use it to curl your hair so it is not just a straightener. I would have liked it to come with a heat mat and it is a little heavy, (it weighs just over 650g), that is not a problem for me but it might be for some people but those are the only two negatives I can see. I really feel this is a game changer in hair styling, I love my Steampod & will never go back to my old gadget..

The SteamPod 3.0 is the 3rd generation of the professional steam styler. It uses the power yet gentleness of steam to transform your hair. I’ve not used a SteamPod before so I can’t comment on what it’s like versus the 2.0 but wow this thing is amazing. It’s got a 360degree rotating cord to make it easier to make waves. I generally don’t use straighteners as they’ve ruined my hair in the past however this feels so good and leaves my hair looking and feeling amazing. It’s great for straightening but also great for waves and curls. To summarise, 10/10 from me!

I am normally a die hard ghd woman but tried these & wow they are brilliant. Since being on lock down I've been trying lots of different styles with them. Hair straightens great straight away only downside is they are a bit heavy and bulky but its easy enough to get used to it.

L'Oréal Professionnel Steampod 3.0 Steam Styler is an absolute game changer, it has forever changed the way I style my hair, it defeats frizz almost instantly, leaving soft, silky, straight and healthy looking hair that lasts and I mean lasts, 3 days later and my hair is still looking fab were as with standard straighteners my waves/frizz would show through within 3-4 hours. I cannot express how much I love this styler, it looks and feels so professional too with the removable comb and water tank it is just a dream to use! 10/10 highly and wholeheartedly recommend to everyone who loves their hair stylers.

Absolutely love this Steampod! I have used other hair straighteners before and can really see a difference. It is so easy to use and the water tank is removable which makes it so easy to fill it in. You can also adjust the temperature according to your hair type/your liking. The hair becomes straight right away just after one stroke. It is also user friendly as the cord can be rotated. In the end, the hair feels soft and silky. Highly recommend.

It took a few attempts to work out what was the best way to use this on my hair. I have dry, wavy, mature hair which is prone to frizz, so I used a mask, leave in conditioner and the thermal protection liquid that came with it. At first, I used the comb side of the straightening panels, at the lowest temperature. However, trying to move the comb through my hair tended to break and damage it. The next time, I used just the straightening plates and this was much easier. The results are straight hair, which I have always struggled with, especially at the shorter sides which tend to stick out normally. This also lasts all day which I was impressed with. However, I am unsure whether to use this on a daily basis due to breakage. I think this may possibly be due to the texture of my hair and people with smoother hair would probably have better results.

You are now signed up to our email

Not a valid email!

Please double check the email you have entered!

There was an error please try again.

You are already signed up to our email!